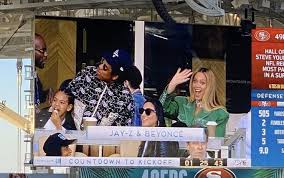 Jay Z, Beyoncé, and everyone's favorite star baby Blue Ivy attended the Super Bowl with a touch of class and family value as they shared smiles, photos, and memories. Despite all of the positive reactions of America, the Carters have received back lash for sitting during the national anthem especially when holding Jay Z's postition of being in charge of the half time show into consideration. Jay Z had made commentary on all the criticism stating that he and his wife Beyoncé were not making a public statement, rather he was simply focusing on his roles of being a producer. He explains that if he wanted to make a political statement “I’d tell you … I’d say, ‘Yes, that’s what I’ve done.’ I think people know that about me.”and continues by explaining “What happened was, we got there, we were sitting, and now the show’s about to start. My wife was with me and so she says to me, ‘I know this feeling right here.’ Like, she’s super-nervous because she’s performed at Super Bowls before. I haven’t,” he said to laughs from the audience. “So we get there and we immediately jump into artist mode … now I’m really just looking at the show. Did the mic start? Was it too low to start? … I had to explain to them [that] as an artist, if you don’t feel they music, you can’t really reach that level.” He then continues by adding, “So the whole time we’re sitting there, we’re talking about the performance, and then right after that, Demi [Lovato] comes out and we’re talking about how beautiful she looked, and how she sounds and what she’s going through, and her life — for her to be on the stage, we were so proud of her. And then it finished and then my phone rang. And it was like, ‘You know you didn’t …’ I’m like, ‘What?'" He also brings up the fact that his 8 year old daughter was there and he wouldn't put her in such a predicament.“Blue [Ivy] was right next to us, we wouldn’t do that to Blue and put her in that position. And if anyone who knows Blue …  If we told her we were going to do something like that, you would have seen her attacking me 100 times. She’s the kid that gets in the car and closes the door and says, ‘Are we there yet, daddy?’ So she would say, ‘What time? Are we doing it? Are we doing it now? It’s 7:05, daddy … It’s 7:06.'” The rapper continues by saying his choice of artist for the event (Shakira and Jennifer Lopez) along with the commercial running [on] social injustice during the Super Bowl should have been a big enough statement.